This new series explores genres new or newish to me as part of my 2017 reading challenge, to be discussed in an upcoming post.

I don’t typically include true crime on my list of preferred genres, though a couple of memories lingering in the back of my mind may have opened me up to it. In 2012 Samantha Koenig was abducted from a coffee hut close to our house and later murdered, and it was my young son’s most in-your-face introduction to the realities that life can dish out. More recently I read a beautifully-written true crime memoir, Finding Bethany, authored by an Anchorage detective whose own sister had also been murdered when he was a boy. He weaves in her story as well as that of his search for Bethany and, later, her killer.

I didn’t know either of these young women, though I recall Bethany’s case from when my son was a new baby, and Samantha’s killer was arrested when my boy had just turned nine. While our personal timeline is insignificant to the cases, the two events stood in my awareness then, like bookends. A strange coincidence occurred in Detective Klinkhart’s own timeline: Bethany Correira disappeared on his sister’s birthday, May 3.

As I type I recall another book I read years before, that of a London detective investigating the murder of a baby. His suspicions were later found to be correct but Victorian England was obsessed with the new profession of detecting, and the investigator who lends his name to the title of The Suspicions of Mr. Whicher saw his career destroyed. Perhaps it set the stage for the affection and admiration I have for homicide detectives in particular, whose work takes them to the dark side, sets them amongst people who block them at every turn, whose passion for restoring some sort of justice to people they (mostly) never knew taps into a deep sense of integrity and demand that murderers pay for their crimes, no matter who they are.

Before a year or two ago, I never heard of Martha Moxley or Michael Skakel, though I vaguely recall reading about the case, perhaps when Skakel was in and out of prison on appeal for the 1975 murder of fifteen-year-old Martha Moxley of Greenwich, Connecticut. More recently his case came to national attention once more when it was determined he had indeed received a fair trial with competent counsel, and his conviction for the murder was reinstated. I saw the news piece at iOTWreport, where blogger Big Fur Hat notes retired Los Angeles detective Mark Fuhrman’s instrumental role in re-opening the case and the resultant conviction. Something struck a chord and I decided immediately to read the book. 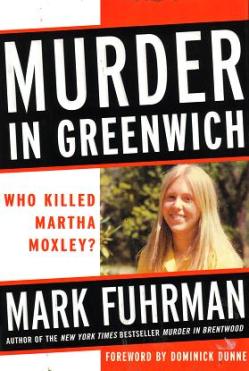 The late Dominick Dunne opens Detective Fuhrman’s Murder in Greenwich account with a foreword that straight away acknowledges the Moxley murder case never really became a national story. This struck me as odd, given its circumstance: a fabulously wealthy neighborhood, closely guarded and protected from outsiders by its own security force, a beautiful teenage girl who died right in front of her own house. That a “Kennedy cousin” lived next door and might have been involved seems like it would contribute to its national story status, though as Fuhrman discovers and relates as his investigation proceeds, Michael Skakel’s family wealth and connections actually play a role in the cover up and shielding of the suspect, even years after the crime.

Fuhrman leads us through sections in the book that outline background, his taking on of the case, evidence examination, individual profiles of participants, and a breakdown of his investigation. Each section contains attention to detail that he writes in narrative and linear form, inviting readers in as he points out and connects details, drawing conclusions or asking questions. For instance, on the night of the murder Martha was out with friends and her mother, Dorthy, was painting a room upstairs. The cold drove her to close the window despite the fumes, and at one point

she heard a commotion on the side of the house—the sound of voices so loud that she could hear them through the closed windows. She clearly heard the voices of male youths, or at least one male youth. She was accustomed to hearing kids on the property, since they often cut through her yard. But these voices didn’t sound friendly or innocent[.]

Fuhrman also reports that several neighbors noted a cacophony of dogs barking, and some even went outside to investigate. Later, in “Hypothesis of a Murder,” he utilizes forensic clues to determine that Moxley was not killed where she was found, and notes a streetlight near where she was initially struck with a golf club before being dragged to a spot under a tree and left. How could it be that when he pursued his investigation, despite advantageous views from some areas to the spot, the noises Mrs. Moxley heard and the amount of blood the crime produced, nobody saw or heard any part of the commotion outside?

Perhaps most awe inspiring is how meticulously Fuhrman traces details, follows leads, digs through years and records redacted and aged, runs up against Greenwich detectives who absolutely refuse to cooperate with him, or at least answer his questions as to why they didn’t follow certain procedures, why they allowed a dog, for example, sniffing and licking around on the ground, to literally eat evidence. The author traces the Skakel family’s earlier history and Michael’s movements through the years as he was shielded by his family from authorities who eventually began to focus on him.

As a writer Fuhrman is to the point, revealing his compassion and detecting talent as he moves forward, each step noting in layman’s terms what even seemingly insignificant details might mean to someone “reading” a crime scene. His periodic illustrations and accompanying notes lend greater understanding not just to the details of a murder and what a detective might be looking for—including what is there as well as what is not—but also what sort of procedures investigators follow, such as note taking, order of who they talk to, keeping people separated and even simple first steps, such as blocking off the crime scene. It is unfortunate, exceedingly sad even, that the Greenwich police had so little experience investigating murders that they didn’t even know to do this.

Is this the largest part of the reason why local authorities refused to help Fuhrman? Did pride get in the way as they bitterly considered the consequences of an outsider solving a case they couldn’t? Did they later come to understand the horrific series of mistakes and careless acts of their force? Or were they afraid of the Skakels and stalling on an investigation in order to protect a well-connected member of their community? Fuhrman touches upon all of this and more, at times expressing his anger at how, with so much evidence, someone could be allowed to get away with this crime, and nobody seemed interested in changing that. This he does with great feeling, though without falling into any over-emotive passages that crash and burn by the time readers finish the book.

On the contrary, this account has stayed with me, and as an outsider I saw Fuhrman’s investigation in a way he doesn’t, as someone not typically exposed to the anatomy of a murder, as he calls it, and as it includes the murder as well as its subsequent investigations. In the case of Murder in Greenwich, this entails also how one copes with an unsolved case and the incredulousness that comes with the awareness that, as Fuhrman frequently declares, someone out there knows something.

As readers and consumers of current news, we now know what the Mark Fuhrman of 1998 didn’t: Skakel faces justice in the end. Given his family’s possible appeal yet to come, the anatomy may still be forming itself, perhaps never to end, not so long as anyone remembers that a lovely, vivacious girl once lived, that despite those in-your-face realities of life that haunt our memories and bookmark our timelines, someone cared enough to stand for her and demand answers to the questions left behind.

Thanks to BFH at iOTWreport for linking!