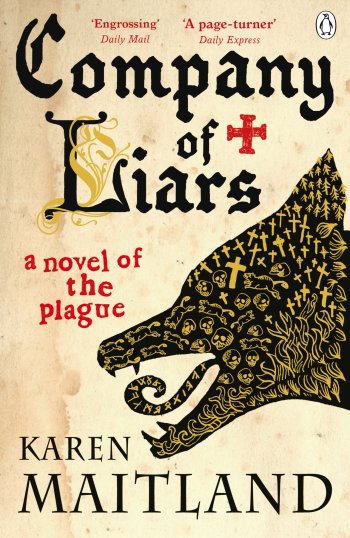 Several years ago, a friend recommended Company of Liars to me and I loved it. I was quite taken with the cover as well, and in recent months it has been on my mind. It is tantalizingly adept at evoking images of the medieval; the author or publisher could probably have left off the subtitle and the cover would still retain its draw.* The red of the lettering and a lone cross provides a beautiful contrast to the background yellow, an easy yellow somewhat a mixture of the soft color people today refer to as “powdery” and the low light sometimes seen coming from windows at night. As the gaze moves over the page, it recognizes subtle spots of light brown, a shading that spreads as we come closer to the binding, and we half expect the aged page to crinkle were we to touch it.

Against this backdrop is illustrated the head of a wolf, a most fearsome creature to medieval people, this one in particular given its long, serpentine tongue, stretching from a mouth open wide enough to reveal fearsome sharp teeth on top and bottom. Here is where it gets slightly tricky as I have forgotten a few details about the book, though some generalities may be accurate when we look plainly. We cannot see his eye in this profile, yet there is almost a sense that he is laughing. At what? The people’s fear of him? Or how exaggerated it is because of their lack of real knowledge of him?

As we examine this wolf’s head further, we also recognize certain symbols, such as the multiple yellow crosses clustered mainly on the top portion of his black head, and drawings of fire along his jawline and throat. “In a world ruled by faith and fear,” this very easily is seen to represent the characters’ relationship with Christianity, however that connection might be playing out in their lives, whether the fires of hell be a consequence they fear or defy. Small skulls dancing in various spots nearby mingle with leaping rats, another association that would have been quite clear to them, even if they do not understand it in the way we today do. Possibly most enigmatic are what appear to be runic letters lined up along the curled tongue, mayhap in reference to an era in which the runic and Roman alphabets functioned, for a time, together, with borrowings occurring. Perhaps the wolf whispers letters speaking of the manner in which even the most pious of our characters employ a dual-speech existence to hide their duplicitous intentions, and the wolf’s murmurings are warning regarding who our company should really fear.

*The novel isn’t really about the plague itself; it is used as a vehicle to assemble the characters and drive them away from their starting point.

Company of Liars by Karen Maitland

The year is 1348. The Black Plague grips the country. In a world ruled by faith and fear, nine desperate strangers, brought together by chance, attempt to outrun the certain death that is running inexorably toward them.

Each member of this motley company has a story to tell. From Camelot, the relic-seller who will become the group’s leader, to Cygnus, the one-armed storyteller . . . from the strange, silent child called Narigorm to a painter and his pregnant wife, each has a secret. None is what they seem. And one among them conceals the darkest secret of all—propelling these liars to a destiny they never saw coming.

Magical, heart-quickening, and raw, Company of Liars is a work of vaulting imagination from a powerful new voice in historical fiction.

One thought on “Cover Crush: Company of Liars by Karen Maitland”

“Summer is the season of inferior sledding” - Inuit proverb